If you’ve walked, cycled or cruised the Bernard-Lawrence neighbourhood, the Marshall Street Conservation Area or the Abbot Street Heritage Conservation Area you’ve no doubt appreciated some of the many beautiful homes and buildings that have been lovingly preserved.  Other heritage gems can be found nestled unexpectedly as you travel the Central Okanagan; Peachland, Rutland, Lake Country, West Kelowna – all have beautiful examples left by those who came before us.  The City of Kelowna Heritage Register alone lists 206 Heritage homes and buildings.

Heritage Week is celebrated across Canada – this year from February 21st to the 27th.  A significant event during Heritage Week is the presentation of the COHS Annual Heritage Awards.  Exemplary homes and buildings are featured in these awards as well as neighbourhoods and natural cultural heritage areas that bring beauty to our community. Of course it is people who preserve our heritage and some people have spent years championing heritage in our community. The COHS celebrates these people too.

Awards are given in seven specific areas:

Two Distinguished Community Service Awards are being presented this year.  As noted earlier in this article, it is people who advocate for, and do the work of preserving our heritage.  Two people who have contributed significantly to this effort over many years are Janice Henry and Walley Lightbody; they have both devoted a great deal of time and energy to preserving and advocating for heritage in the Central Okanagan. 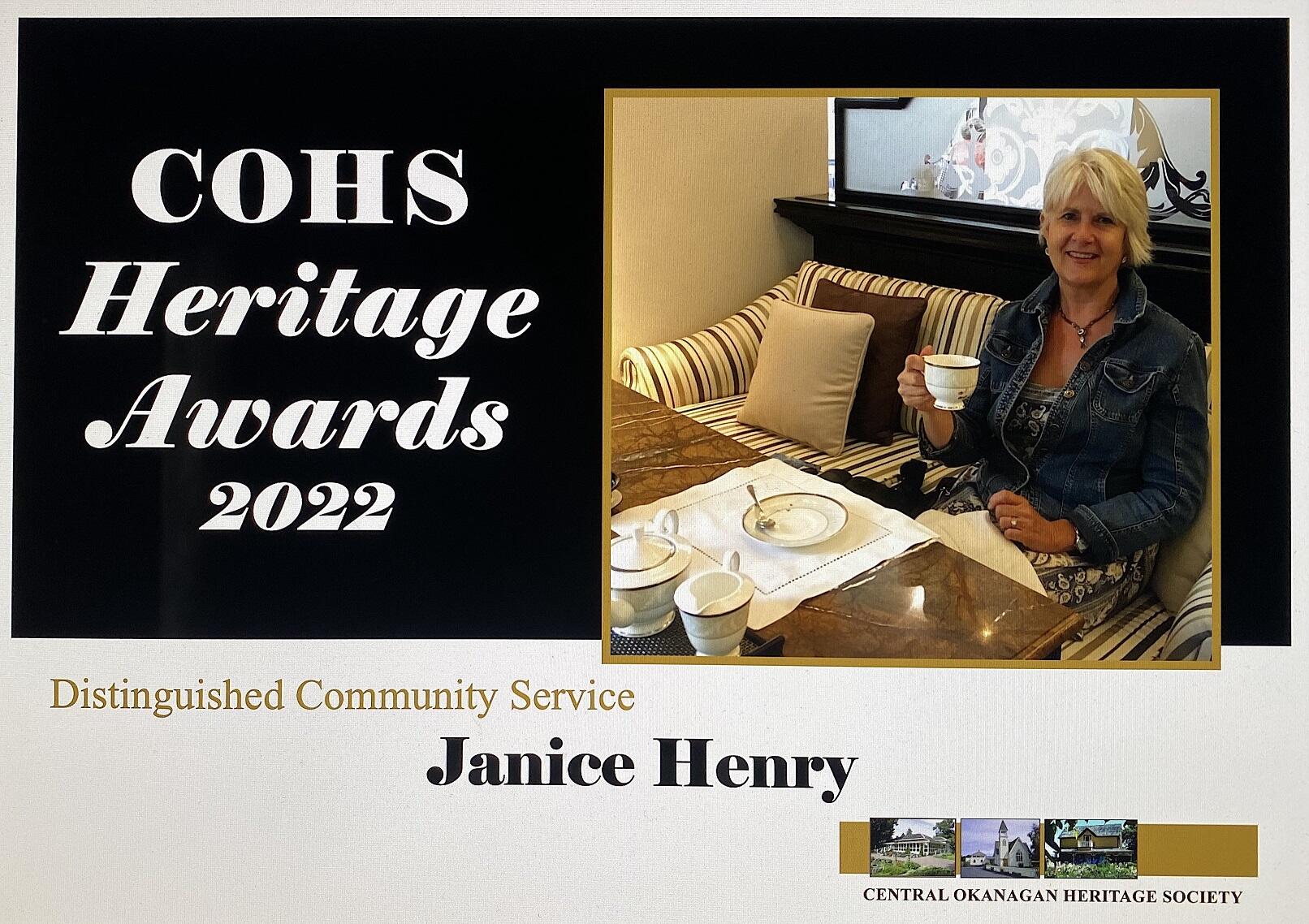 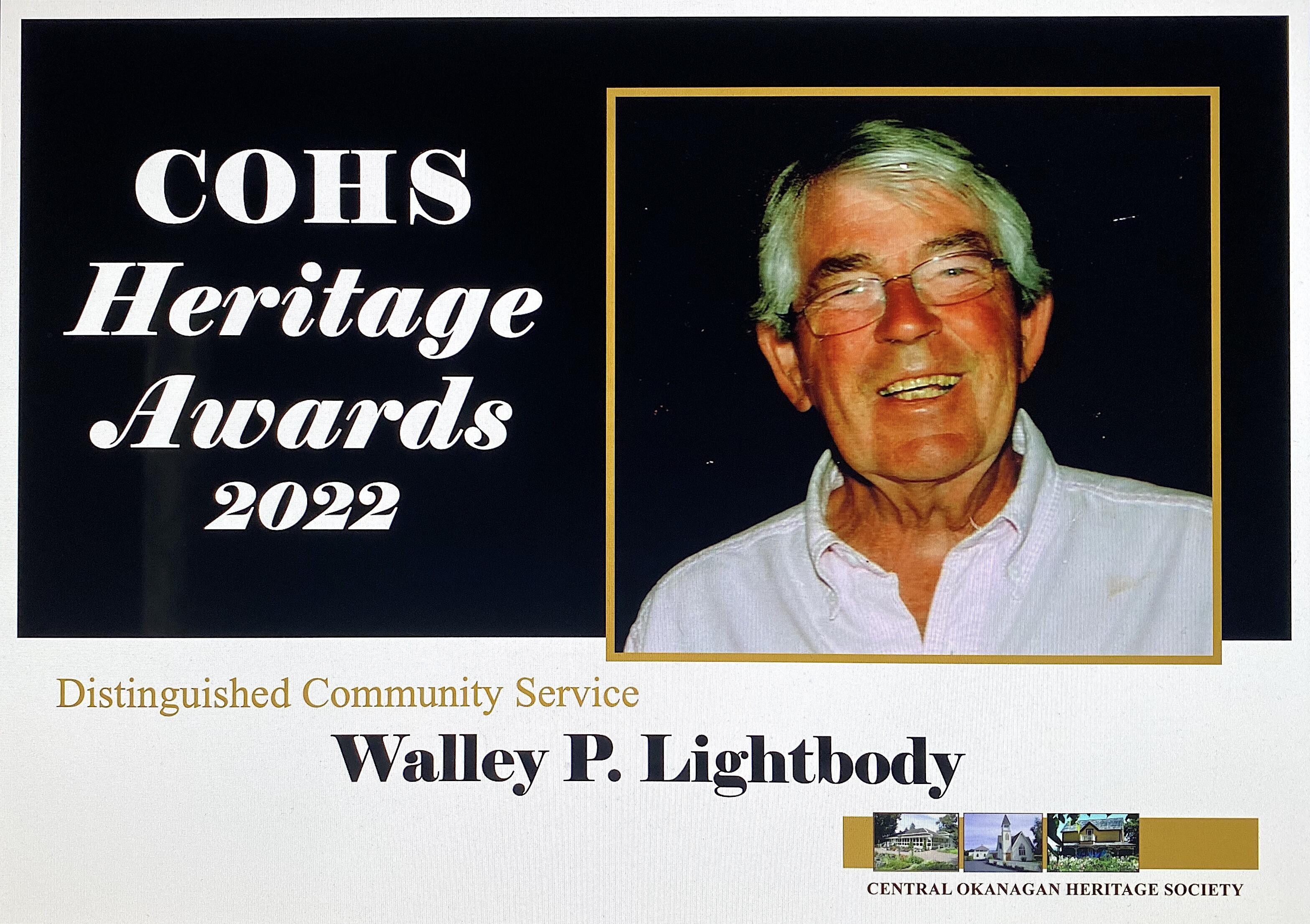 The award for Continued Conservation of a Heritage Building in Residential Use is presented to Leckie House situated at 781 Bernard.  David and Date Leckie were very involved in the development of Kelowna in their roles as business, community and church leaders.  Their home has gone through several changes over the years; from a residence to a commercial endeavour and back to a residence again.  The home has been meticulously maintained and so retains its original 1906 character and value. 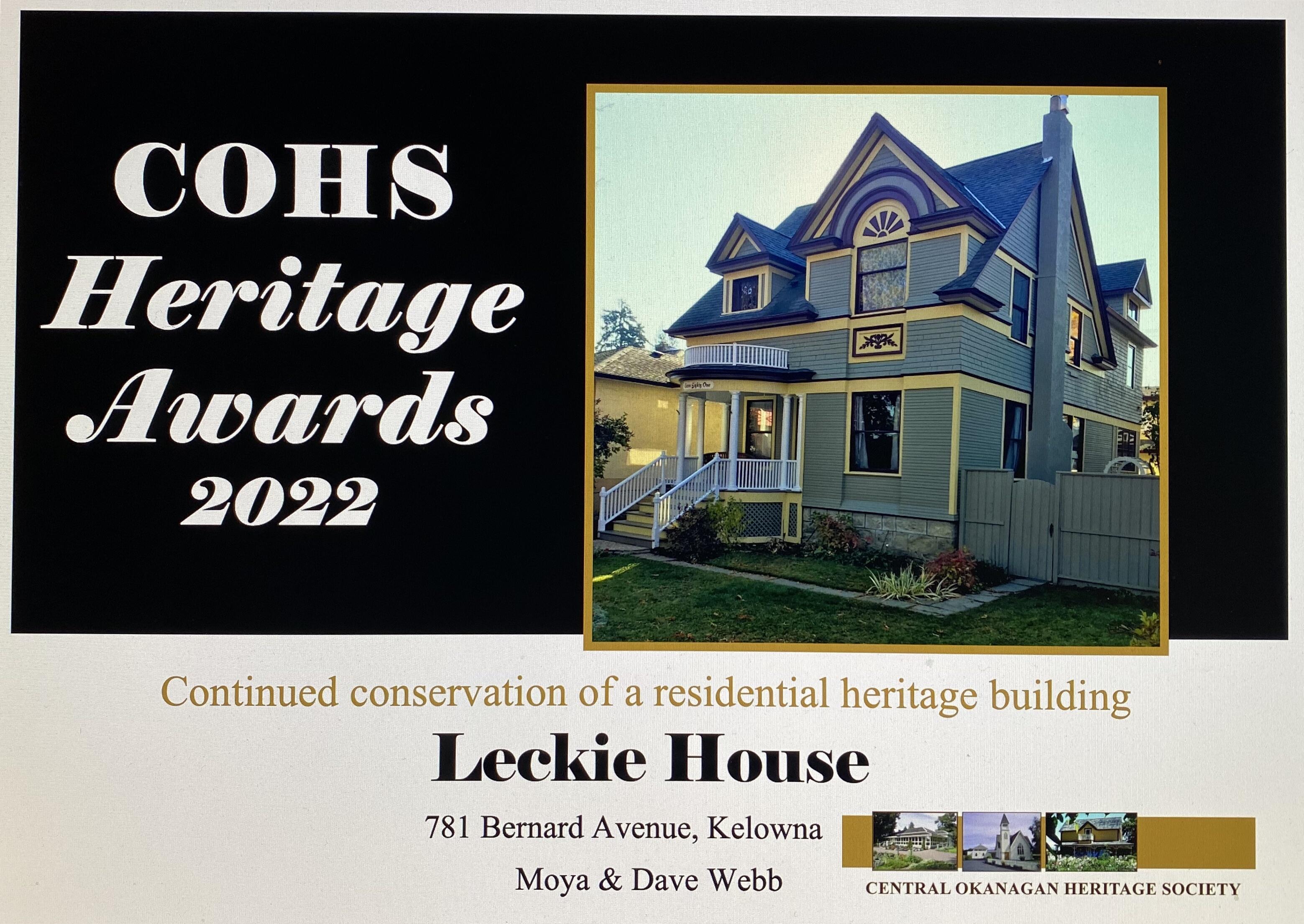 The award for A Conservation Project on a Heritage Building in Non-residential Use is presented to St. Aidan’s Church in Rutland.  It graces the corner of Rutland Road and Mugford Road; you may have glanced at in passing, but next time you go by, notice how it has been improved, added onto, and repurposed as a Buddhist Temple; the old continues to be new! Find out how it compares to the original Anglican Church built 109 short years ago. 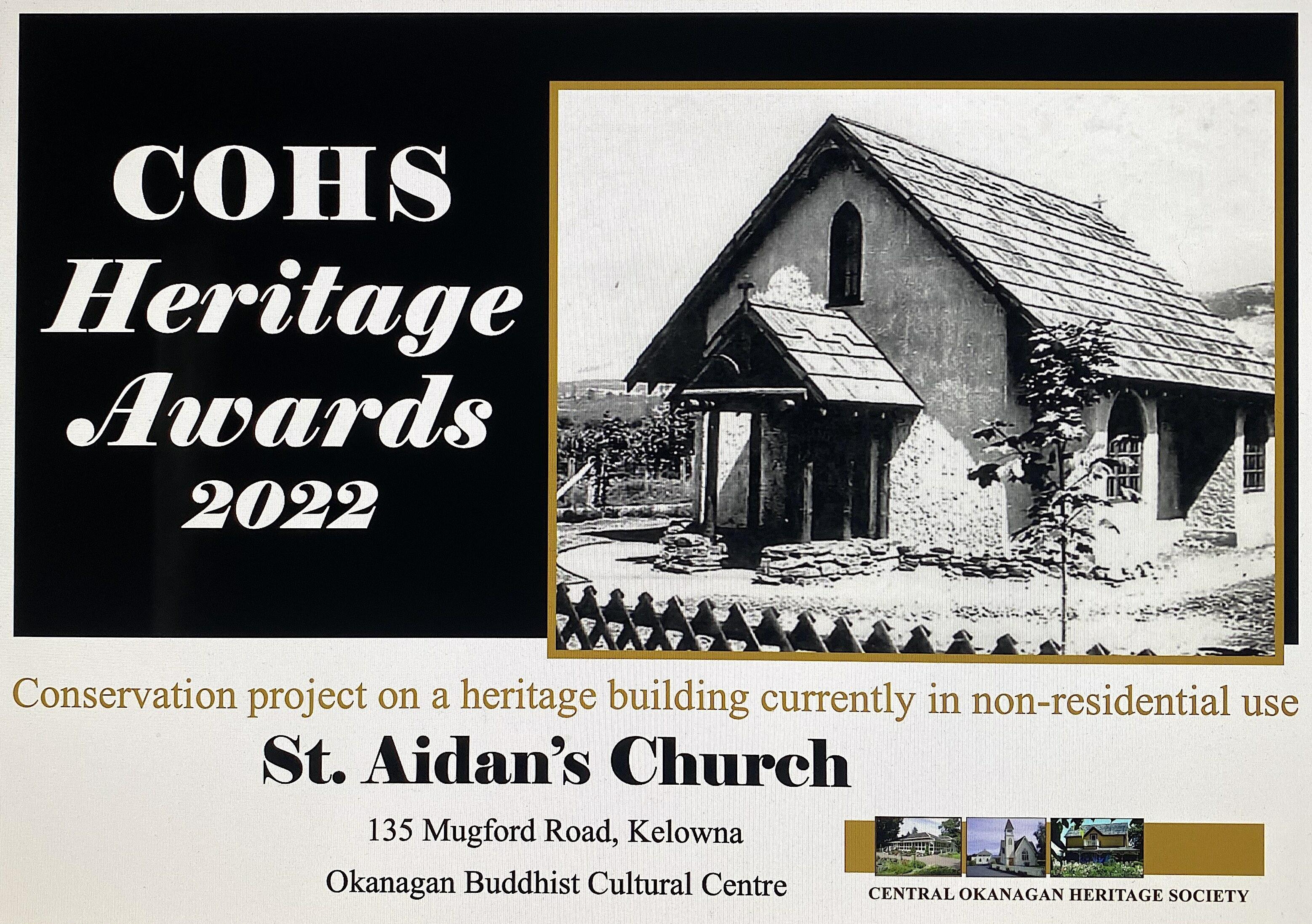 The award for A Conservation Project on a Heritage Building in Residential Use is presented to the Anne Stirling House at 2178 Pandosy Street. This impressive home was built 112 years ago and is still in use as a beautifully restored Bed & Breakfast.   The 5 porches and stairways have all been repaired and painted; this character home and gardens can now be enjoyed and shared by many guests visiting Kelowna.

The award for Continued Conservation of a Heritage Building in Non-residential Use is presented to the Raymer Block at the corner of Bernard and Water Street. Find out why it had to be rebuilt 4 times! It is rich with Kelowna history and has been beautifully conserved over the years; situated in downtown Kelowna its brick façade and detailing adds to the sidewalk charm of Bernard Street. 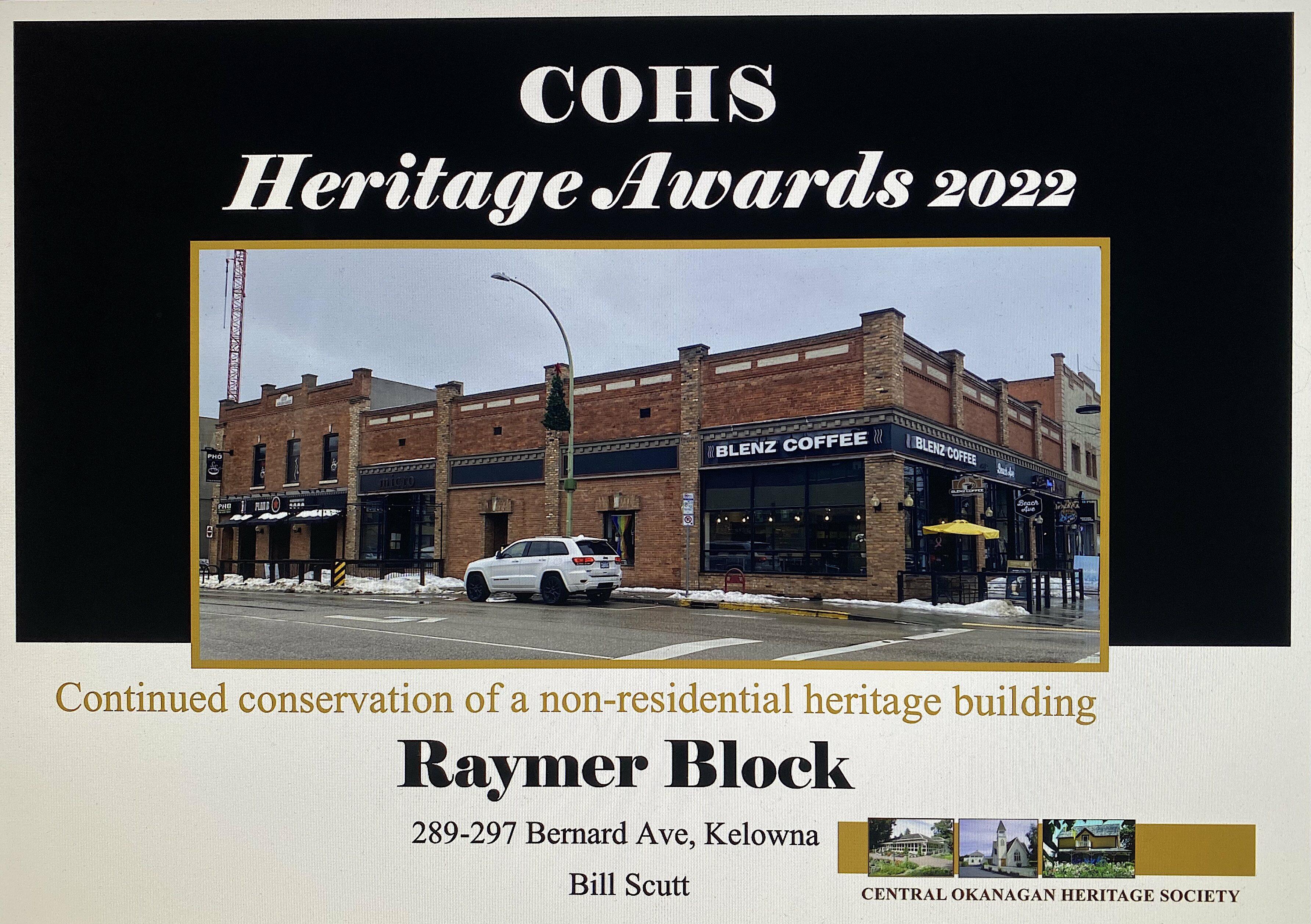 The award for Preservation of a Neighbourhood or Natural Heritage Area is presented to the ‘700 - 800 block of Sutherland Avenue’.  These modest but cute bungalows are still in use today and were home to many Kelowna families over the years; they have a charming uniformity and character dating back to the early and mid 1900's. 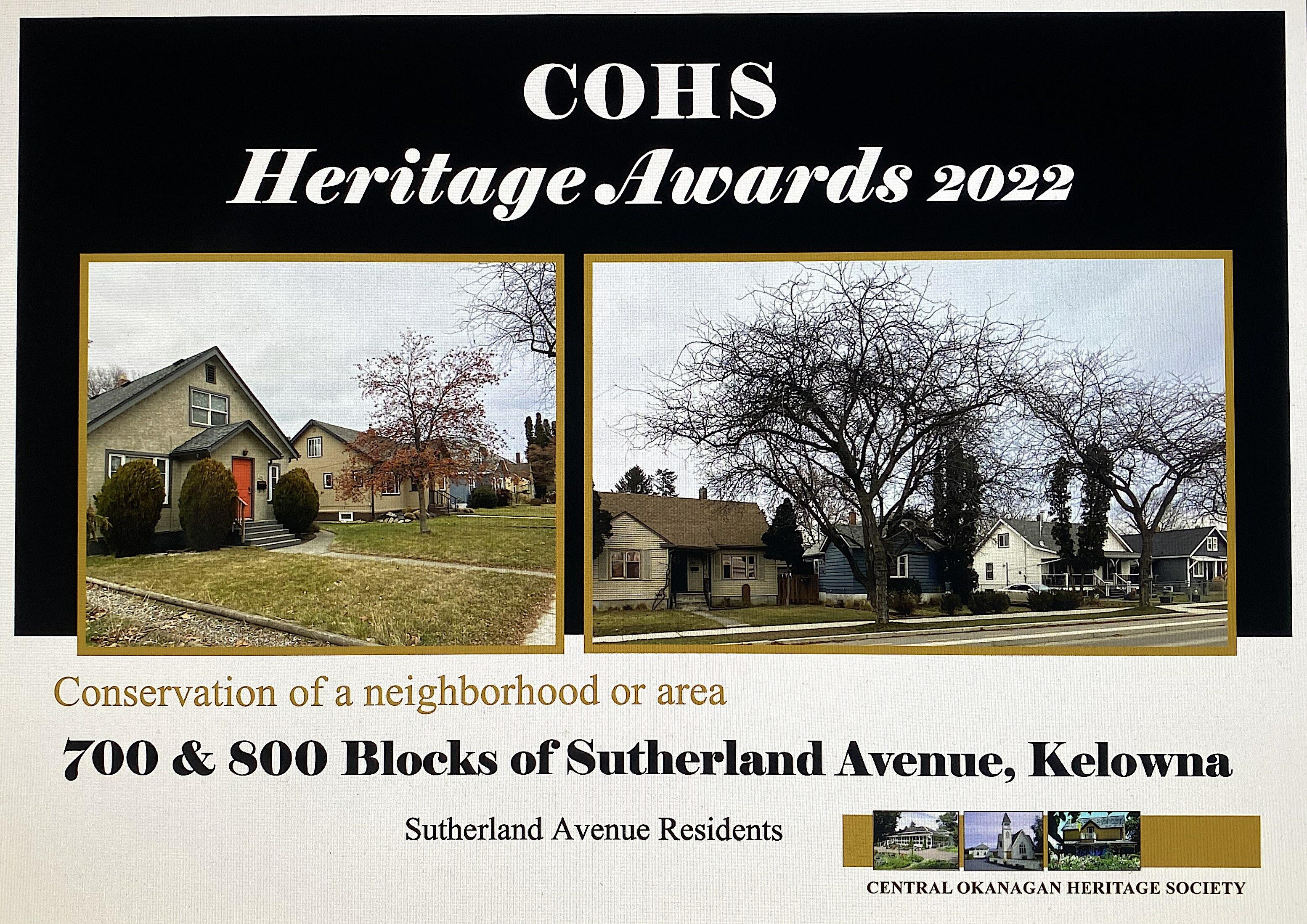 The award for Special Heritage Project is presented to the Kelowna Branch of the Okanagan Historical Society. For 28 years, members of the society have written weekly articles in The Daily Courier; as of today’s date they have contributed 1,238 articles!  The vast majority of these articles were about Kelowna and other Central Okanagan communities and the people who lived here; an amazing historical record by a dedicated volunteer group. 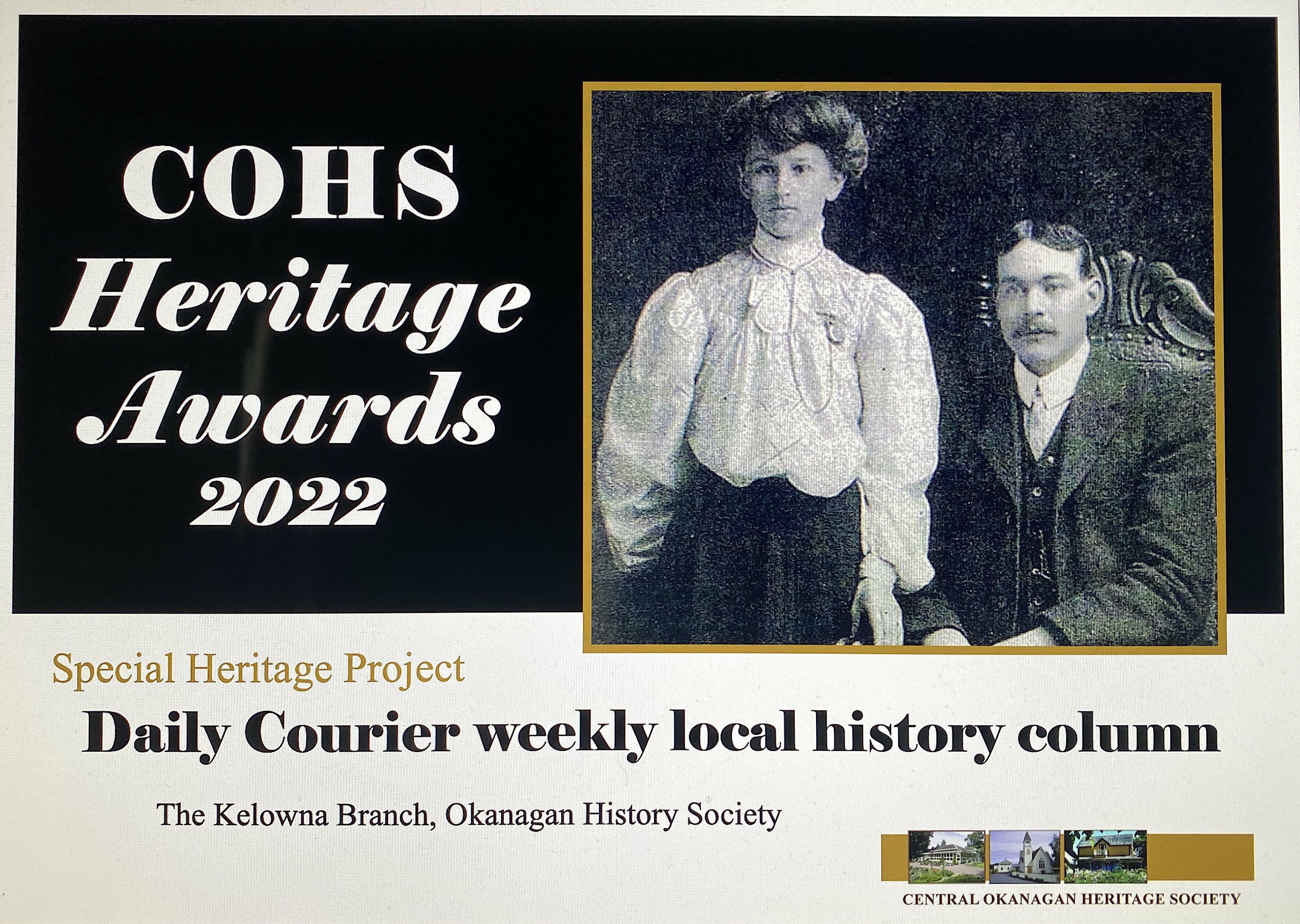