Canada’s Governor General, Kelowna’s first Mayor, BC’s longest serving Premier and a couple of Kelowna city councilors; they all figure in this year’s Heritage Awards. As does a re-purposed packing house, an urban log house, an Irish Pub and stiletto heels.

This year’s Awards were selected by the committee, with difficulty, from a long list of worthy nominations! The annual Awards are part of National Heritage Week and are an opportunity to feature some of the best of Kelowna’s past; with its many ties to the present. 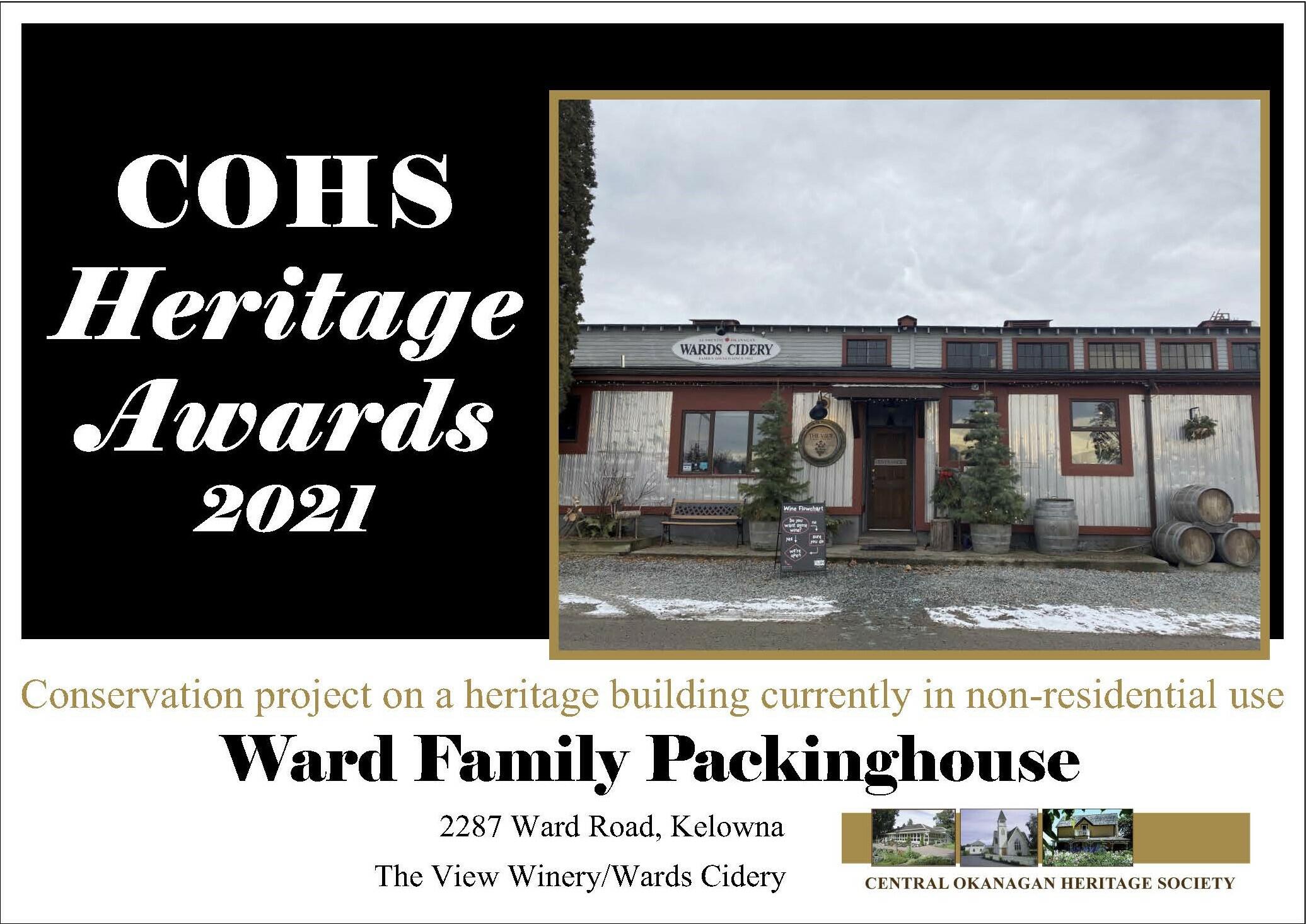 The View Winery and Vineyard is the winner of the award for ‘A Conservation Project on a Heritage Building Currently Not in Residential Use’.  Built one hundred and two years ago as an apple packing house the building has been in the Turton/Ward family for five generations.  In its new life as a winery and cidery it still has the wonderful ambiance of the old wood packing house, still with its original doors, window trims and beams; a wonderful example of a heritage building full of new life.  The stiletto pumps that feature mischievously in their logo?  Jennifer tells it best on their website under the heading ‘Why the Red Shoe Label?’ www.theviewwinery.com 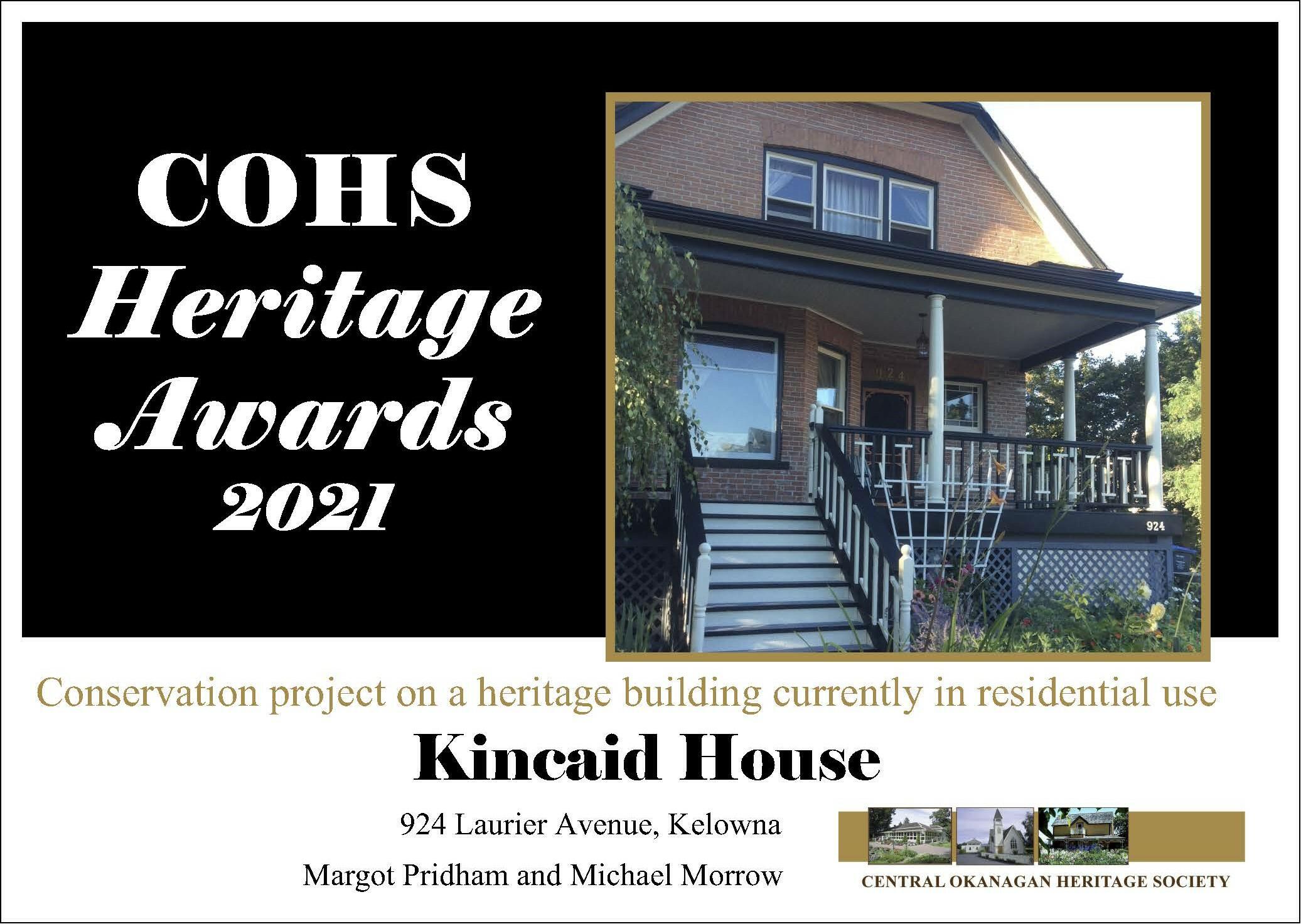 Six years before the View Winery building was erected, James Kincaid built what we now call The Kincaid House at 924 Laurier Avenue.  It is still lovingly cared for and lived in by Margot Pridham and Michael Morrow and wins this year’s award for A Conservation Project on a Heritage Building Currently in Residential Use.

One of the early owners, the Millie Family began one of the early telephone systems in Kelowna; it later became part of BC Tel and then today’s Telus. Henry Mille was also a city councilor as was Josia Shier who purchased the property in 1920.

Old houses need facelifts just like people and over the years the house has been raised, expanded and had its front porch, stairs and balcony balustrades redone.  If only James Kincaid could see his handiwork all these generations later!

A log house in downtown Kelowna?  Yes! The McCelvey House at 560 Cawston Road has stood the test of time since William James McCelvey began building it in 1934.  It is the deserving recipient of the award for the Continued Conservation of a Heritage Building Currently in Residential Use.  William cut the logs with a Swede saw at Sunset Ranch where he was the foreman and dragged them out of the bush with horses.  William and Jeanee’s grandson David Cousins, and his wife Lynn, still live in the home.  They work hard to conserve its heritage character and the many original features of the home. 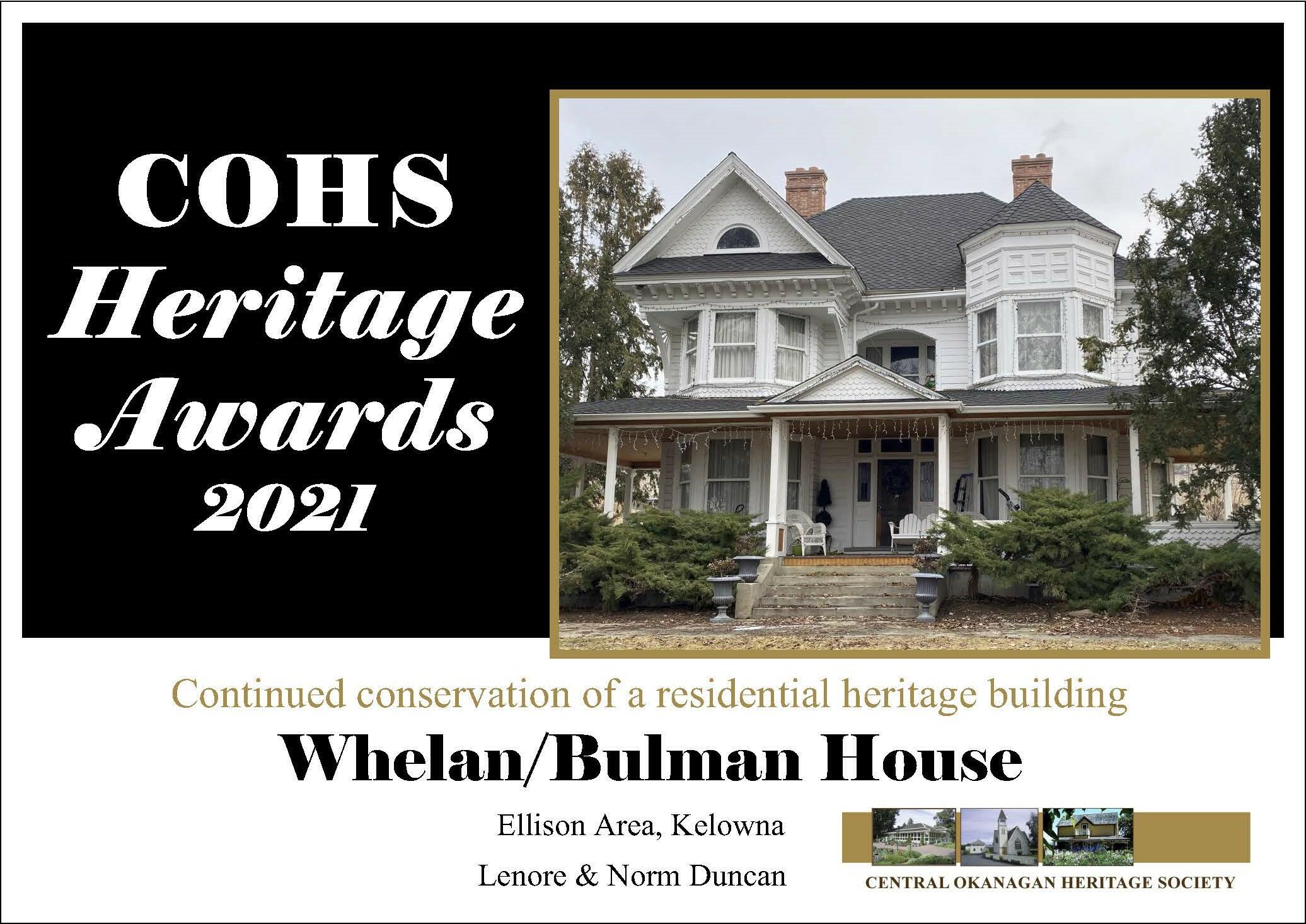 Actually, there were so many nominations for the previous category that a second winner was selected.  The Whelan/Bulman House was one of the first homes in the Ellison area and at one hundred and twenty-seven years old is beautifully preserved.

It was built in the Queen Anne style by H.W. Raymer, a well-known builder and the first mayor of Kelowna. The Queen Anne style features bay towers, corbelled chimneys, a balcony and a covered porch with large pillars.  The current owners of the house, Lenore and Norm Duncan, have continued to conserve the house beautifully, going out of their way to match the original design with its rich original detailing. 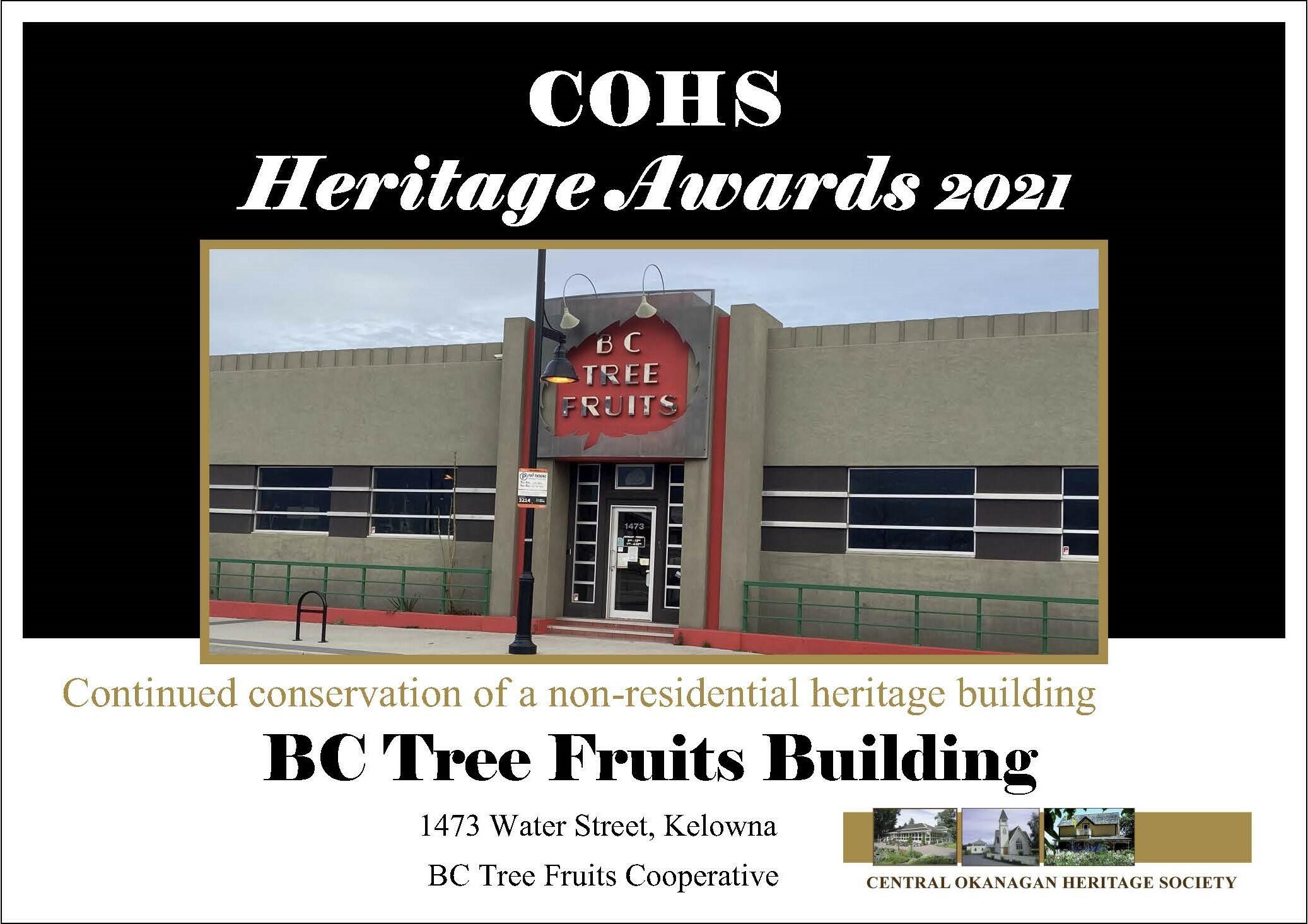 The BC Tree Fruits Building at 1473 Water Street in downtown Kelowna earned an award for the Continued Conservation of a Heritage Building Currently in Non-residential Use.

This unique building was built in 1946 during what was referred to as ‘The Golden Age’ of the Okanagan fruit industry.  The style of the building is unique in Kelowna; it is called ‘Moderne’ and came out of the earlier Art Deco style.

BC Tree Fruits Cooperative has recently sold the building but it is hoped that the new owners will find creative ways to maintain as many of the character defining elements of this building as possible.  It has a lot of great memories in Kelowna! 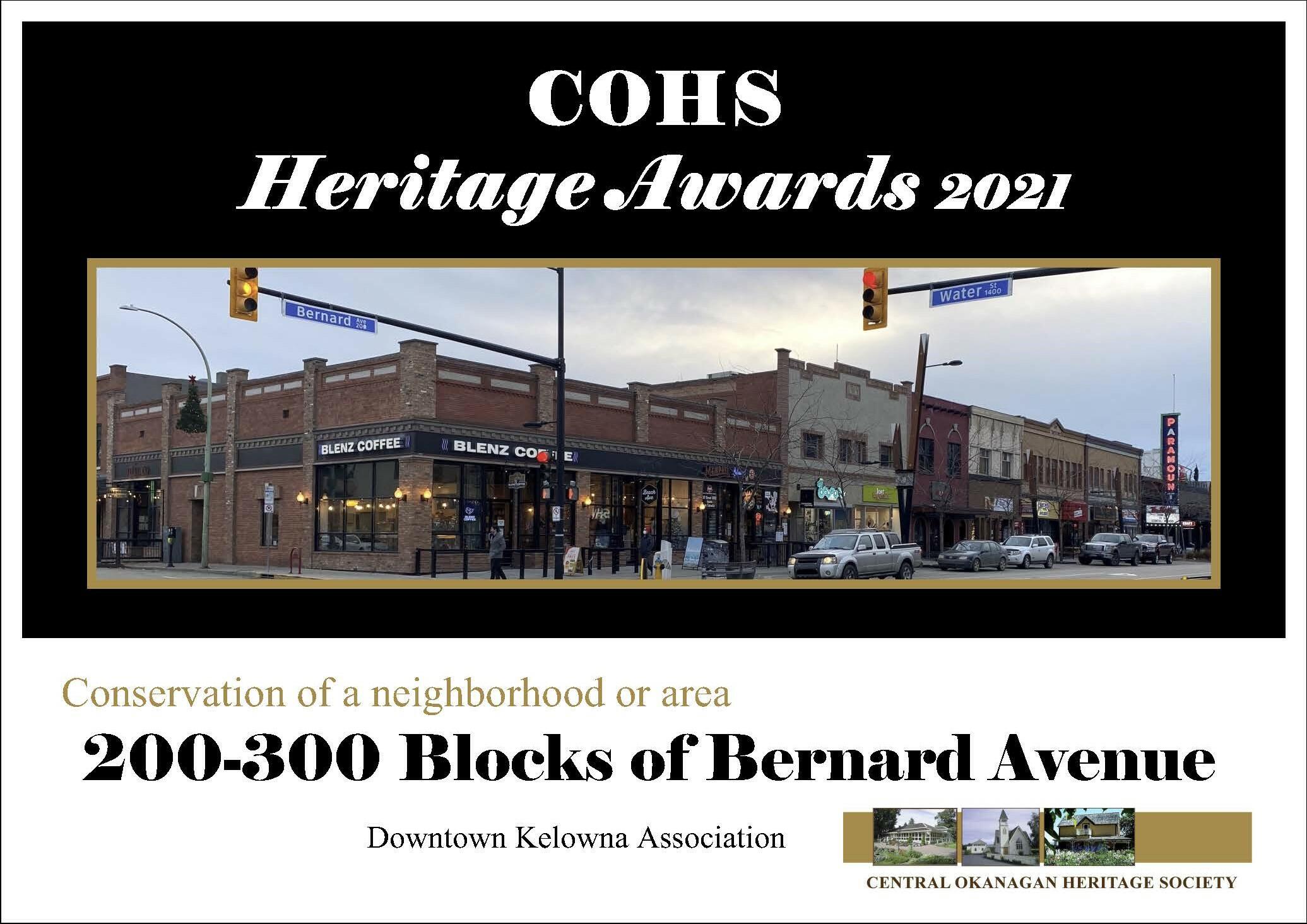 Just down the road from the BC Tree Fruits building is an avenue that is quintessentially ‘Vintage Kelowna’.  Bernard Avenue from Abbott Street to Pandosy is the winner of the award for the Preservation or Restoration of a Neighbourhood or Natural Heritage Area.  The award will be presented to the Downtown Business Association along with $500; an award that is generously donated each year by the Central Okanagan Foundation for the winner in this category.  This summer with Bernard Avenue partially closed to traffic the street seemed more like a neighbourhood than ever as it came alive with people strolling the street and eating outdoors at make-shift seating areas. The historic, lower buildings leading to a view of the lake made us appreciate more than ever the value of these special blocks and what a vibrant community they support.

WAC Bennet, BC’s longest serving Premier, was an early entrepreneur on Bernard Avenue and Kelly O’Brien’s Pub? It was the Royal Bank for fifty years.  There are many heritage buildings on these blocks; their stories can be found on the City of Kelowna’s ‘Heritage Register’. 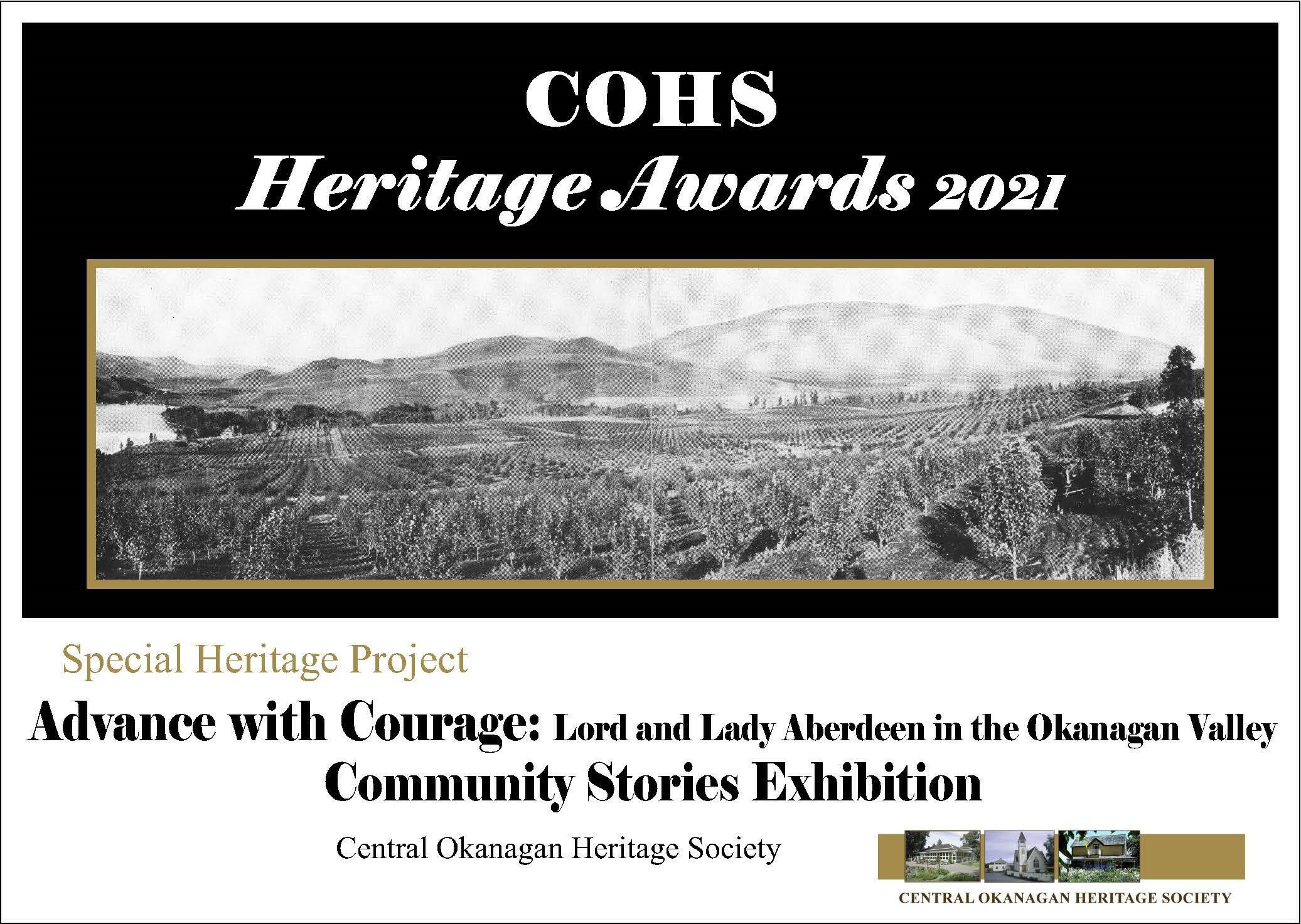 It is fitting that the winner of the award for a Special Heritage Project is a virtual one. ‘Advance With Courage; Lord and Lady Aberdeen in the Okanagan Valley’ is an online presentation sponsored by the Digital Museums Canada:  Community Stories project and can be found elsewhere on this website.

Lord and Lady Aberdeen were wealthy British aristocrats who moved to Canada in 1889 and contributed to the Okanagan Valley as early farmers; Lord Aberdeen also became Canada’s 7th Governor General in 1870.  Lady Aberdeen kept a detailed journal and was also a keen photographer, capturing the people and places from her 19th century perspective. 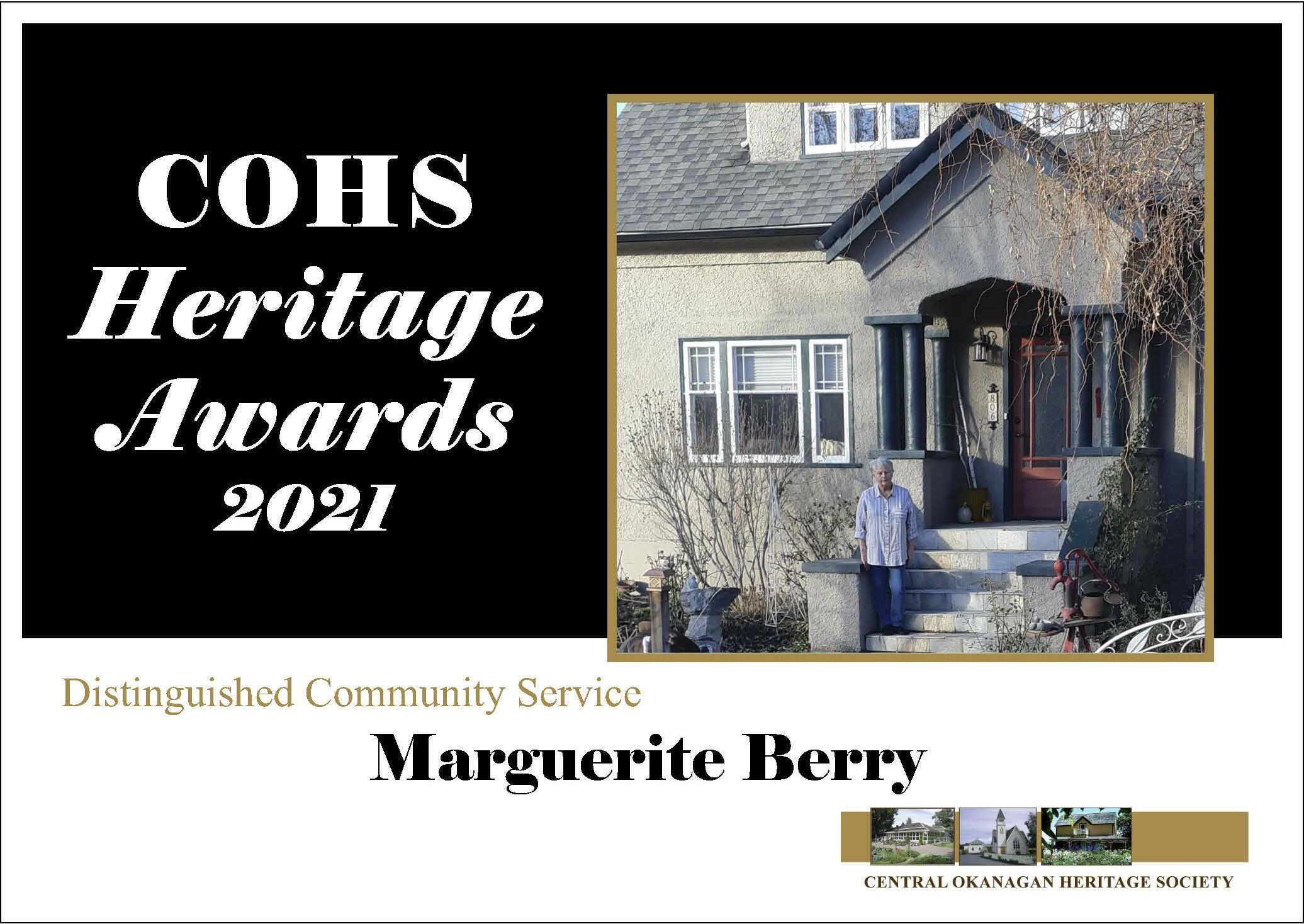 The preservation of our beautiful heritage buildings and places doesn’t just happen.  Who are the people who help to preserve the best of our Heritage buildings and places?  You’ve met some of them in this article but we would like to feature one person in particular who epitomizes these efforts.  Marguerite Berry is the winner of the 2021 Distinguished Community Service award.  Marguerite has been involved with heritage for many years; she has worked tirelessly on the board of Father Pandosy’s Mission, helping to place Historical Markers in front of notable Heritage buildings, serving as a past president of the Central Okanagan Heritage Society, involved with the Kelowna South Association of Neighbourhood; the list goes on!  Whether she is conserving her own heritage home, writing grants to preserve heritage or educating people about Kelowna’s heritage, she is a long-time influencer for heritage in Kelowna.

A big thank you to the City of Kelowna, Tim Hortons, Central Okanagan Foundation and the Daily Courier who helped to sponsor Heritage Week and Heritage Awards in Kelowna this year.