In the vast majority of cases, historic homes are named after their first owners, or in some cases significant individuals or families who lived there.

While it is true that the ‘Fleming House’ was built by (for) Frederick Brent in 1870, an Okanagan pioneer, the house has come to be called the Fleming House, due to the desire to see it restored to its appearance while owned by William H Fleming and subsequently by his son the Rev. Everett Fleming.

During the late 1990s’ the Brent homestead was coming under increasing development pressure with the extension of Leathead Rd.  In order to preserve the buildings a plan was needed to move them to a new home. In June 1999 Kelowna City Council approved a ten-acre parcel at the corner of Leckie Place and Dilworth Drive.

For the next several years a COHS volunteer committee worked with Don Luxton, a Vancouver based Heritage Consultant, city staff and others on all aspects of the move.  On December 5th, 2001, the Conservation and Feasibility Plan was presented to Kelowna City Council. A Dec 10th city file states in part :

“AND FURTHER THAT the Brent’s Grist Mill relocation and site development costs (servicing, parking and foundations) be included for consideration in future City of Kelowna budget considerations.”

Council comments from that same meeting state “security and fire protection will be essential from the start once the buildings are moved onto the City-owned site.” 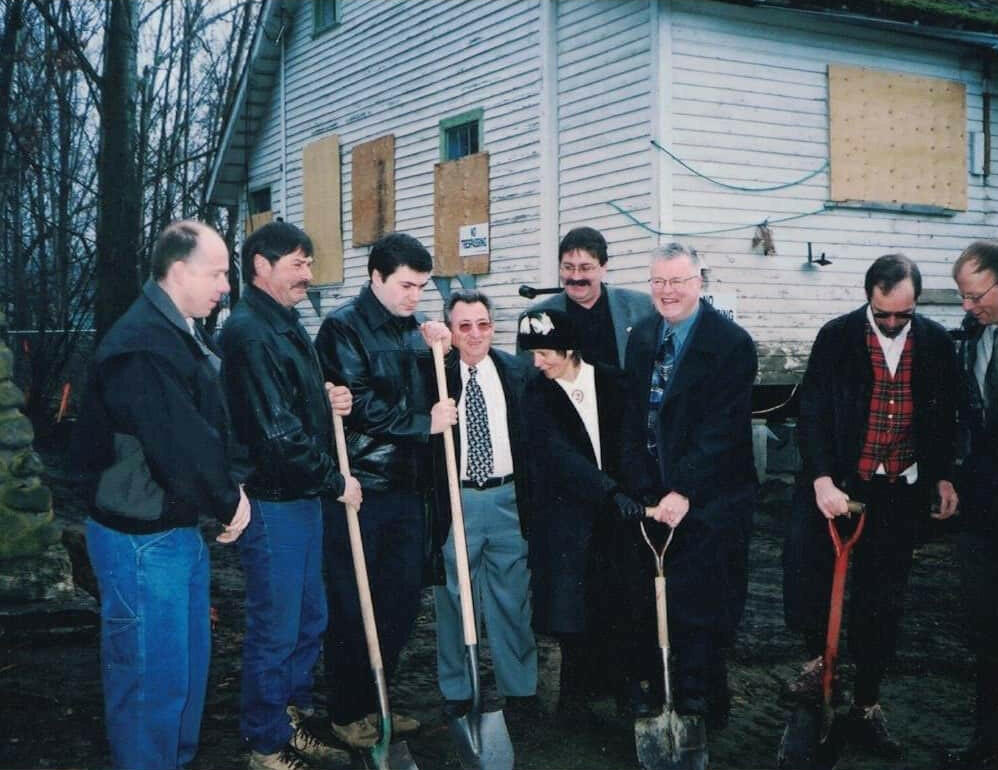 The buildings were successfully relocated in 2002 and on February 17th, 2003, a sod-turning ceremony took place at the newly named, “Brent’s Heritage Homestead and Grist Mill Park.”  Mayor Walter Gray, MLA, Al Horning and other dignitaries were present.

In   May 2003 COHS sent a letter to the City of Kelowna, requesting the city to “commence with the planned on-site servicing of the site at the earliest possible opportunity.” The letter went on to say, “having the buildings sit empty without a resident caretaker on site increases the risk of damage and or destruction.”

In 2008 a second Feasibility Study was undertaken by Don Luxton. Don worked with locally based Urban Systems as well as community members including COHS staff and volunteers to create a comprehensive park plan.  In the closing paragraph of the Executive Summary Don stated, “It is now timely to move towards implementation of the restoration plan for the buildings.”

During the next period of years COHS raised $55,000 through fundraising and grants for restoration of the Fleming House. While the Grist Mill building is vitally important, it was felt that by having the house with a resident caretaker on site a level of protection would be present.  “This was no small task as we were raising funds for three derelict buildings sitting in an empty field.

The monies raised for the Fleming House were used for a series of repairs including the installation of a new split shingle roof.   The work also stabilized the small adjacent dairy barn.

The City of Kelowna in the mid to late 2010’s had a Civic Properties Manager named Randy Cleveland. A manager who was not afraid to explore and even support heritage.  Randy held a series of meetings with civic groups to get a better handle on the city’s own heritage inventory and looked for community direction in helping to set city priorities. Brent’s Grist Mill came out on top.

In March of 2014, the city issued a Request for Expression of Interest (REOI) on three City owned Heritage Sites. The Surtees property in the lower Mission, St. Aidan’s Church in Rutland and the Brent’s Grist Mill, house and dairy barn.

The City’s 40 page REOI includes phrasing such as; “Heritage is a key component in creating and maintaining a community’s sense of place, i.e., in connecting its citizens to the collective memory of the community, to the people and events that have shaped who and what we are today. Heritage buildings are the physical manifestation of our history.”

The REOI goes on to say, “The city owns a number of heritage assets that have significant meaning to the citizens of Kelowna… the city wishes to maintain these assets.”

While COHS’s heart and money had been with the Brent project for over twenty-five years, it became apparent through the rest of the REOI process that COHS was not what the city was looking for.

No Proposals came in on Brent’s Mill due to the significant amount of money and expertise required. It would be wrong to think that this in anyway was a sign of a lack of community interest. On the contrary.  COHS hosted a packed meeting at Reid Hall on June 23rd, 2014.  A range of speakers including Duane Thomson with the new Okanagan Rail Trail group spoke from the angle of tourism; UBC Professor James Hull spoke about the importance of Grist Mills in particular.  Those in attendance were keen to see Brent’s Grist Mill brought back to life.

As a result of this meeting, COHS was asked by a city staff member to create a proposal for how to move the Brent’s Mill project forward.   With limited resources, COHS delivered a document in five weeks called “A Solution for Brent’s Mill.” An opportunity for the City and COHS to partner once again.

The report showed how with an annual city expenditure of $100,000 a year for three years combined with gifts in kind secured from community groups the project would be well underway.

The City took the work done by COHS and started to undertake the first few steps laid out in the plan but with no further contact with COHS.

Fast forward to 2018 when the Fleming House saw its first fire. The roof was completely destroyed. The city was going to tear it down, but on reflection and with input from local heritage experts, is was agreed to clean it up  and put on a metal roof which would preserve the interior of the building till a way could be found to do a proper restoration. We now have a second fire which has all but destroyed the Fleming house. 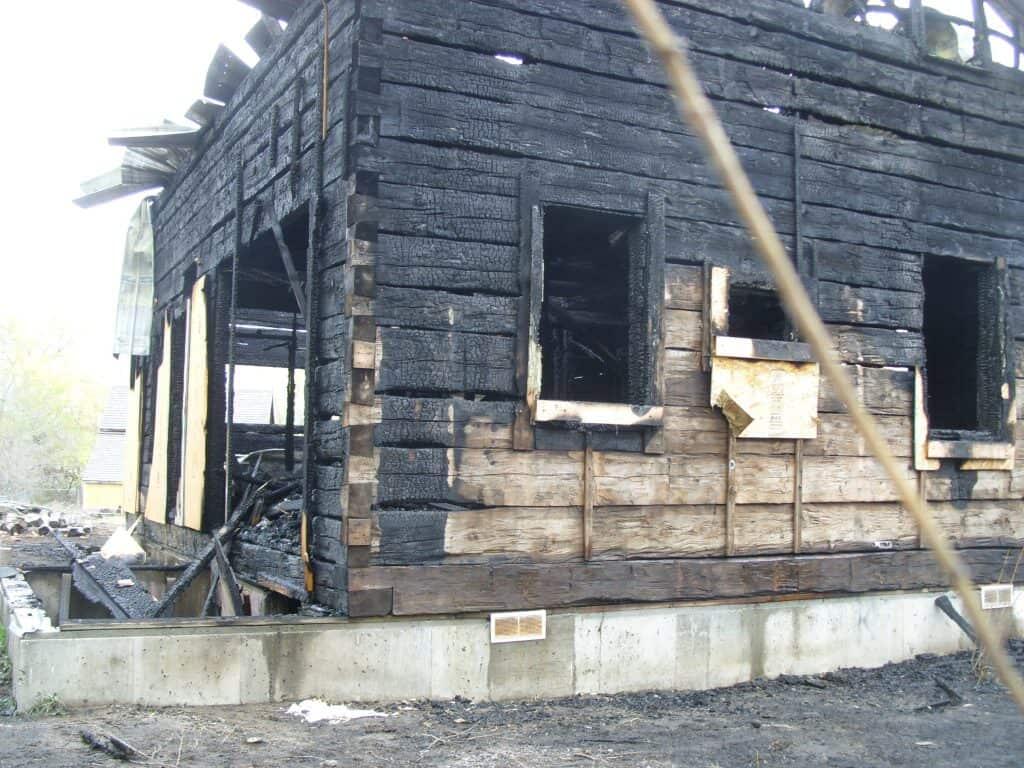 While the city has many competing interests for community tax dollars, allocating some money to preserve one of the few remaining city-owned designated heritage assets seems reasonable.  The location of the mill and outbuildings along the Okanagan Rail Trail corridor brings hundreds of people right past the doorstep of a significant piece of Kelowna and BC heritage.  Tremendous potential exists for Brent’s Heritage Homestead and Grist Mill Park to become one of the most used and visited jewels in the city’s parks system. The Central Okanagan Heritage Society looks forward to working with the City and others in any way we can to make this possible.  For more information you can see the Fleming House exhibit that COHS created on the Virtual Museum of Canada Website.